So, did anyone here play the demo/beta this weekend and have opinions?

I’m just curious to see if anyone else found it kinda boring with a bland, generic story. I liked the flight controls when I played the Alpha—those were REALLY sweet—but everything else didn’t ‘wow’ me and I’m struggling with wanting to buy this game now.

I didn’t play the beta. I could probably deal with a generic story if the gameplay is there. Is it pretty Destiny like with it’s progression/quests/loot ?

Quests and loot yeah. I didn’t progress a lot (the Alpha only had one Javelin available). And the shooting is like Mass Effect’s multiplayer stuff if you’ve ever played that. So, the shooting felt MUCH worse than Destiny, but they had the flying down. That part was great. The hub world was boring, the story was confusing and well, I guess that part is like Destiny as well.

Pretty sure Bimble has not played Mass Effect, so I’m going to go out on a limb and predict he won’t like Anthem. You can prove me wrong, but considering your heritage is in FPS, I’m guessing you are better off sticking with Destiny.

It felt like a poor version of The Division but with Iron Man suits and shitty shooting mechanics.

Yeah, this isn’t for me.

TechRadar: 3/5
Anthem is an immensely fun game wrapped up in a dull story and a repetitive end-game. It will no doubt get better as time goes on, but this isn’t a great starting point.

VG247 - No Score
I went into Anthem with an open mind. It’s a game I wanted to succeed from a studio I’ve always been fond of. Unfortunately, it’s everything everyone feared at reveal. It’s a hollow experience that’s been designed to appeal to the widest market possible while squeezing more money out of those who are hooked in by its doggy treat design.

Boomstick Gaming: 6.9/10
It’s not quite the endlessly fun online grind-a-thon experience that will have you logging on nightly for months, but instead, Anthem is a fairly competent action RPG shooter.

CGMagazine: 7/10
Despite its abundance of bugs, narrative shortcomings, and an overall small pool of content, I still enjoyed the fun gameplay of Anthem and plan to revisit it after the game has developed a larger suite of content and events for me to experience. In its current state though, the experience is one I would recommend waiting on for people on the fence because it doesn’t quite deliver yet on what Bioware envisioned for this game.

Flickering Myth: 5.5/10
Slick flying and gunplay collide with infuriating design choices throughout Anthem. But its biggest problem is a lack of soul – this is a cynical, committee-produced product bereft of any significant creative spark.

Anthem has flashes of being a really good game, but what’s the point if it’s not fun?

Destructoid: 7/10
BioWare will need to build quickly on top of its shimmering jet-fueled foundation to hold people’s interest, but folks looking for a new neighborhood to move into might want to give Anthem a try – either now or after fixes and updates.

GameSpot: 6/10
Anthem has good ideas, but it struggles significantly with the execution. It’s a co-op game that works best with no one talking; it buries genuinely interesting character moments and puts its most incomprehensible story bits at the forefront; its combat is exciting until you get to the boss fights and find your wings have been clipped. Even the simple, exhilarating act of flying is frequently interrupted by the limitations of your javelin, and you never quite shake that feeling of disappointment–of knowing, throughout the good parts of Anthem, that you’ll inevitably come crashing back down.

IGN: 6.5/10
Anthem comes closer to succeeding as a co-op action RPG than it does as a story-focused game, but only does so after a trying grind through its repetitive main quests. And even at that, its standout elements like the flashy combat and mechanically rich bosses still have a long way to go in terms of polish, variety, and balance. I have hope that with time BioWare can capitalize on its strengths and turn Anthem into something worth investing all these hours into, but all indications are there’s a lot of work to be done to reach that point.

Spiel Times: 7/10
Whether Anthem surpasses or fails to meet expectations depends largely on the audience who evaluates it. Devoted fans of BioWare may be disappointed that Anthem is not the next Mass Effect. It lacks the depth in worldbuilding and storytelling that the studio has shown in the past, and that may rankle with some long-time devotees of the studio known for their deep single-player RPGs. But those who were attracted to Anthem based on the promise of an exciting shared world looter shooter will find a lot to love in Anthem’s satisfying flight and combat.

These are worse than I was expecting. And I wasn’t expecting much after playing the Alpha and I feel like I just typed something like this for Crackdown 3.

I’m hoping these scores improve once the console versions get reviewed. I guess that Day 1 patch fixes MANY of the issues and complaints from the early access PC version that’s getting destroyed online right now.

a dull story and a repetitive end-game

narrative shortcomings, and an overall small pool of content

Day one patch ain’t gonna fix any of that.

There are three other games that BioWare could have looked at as a lesson on how not to launch a Live Service Looter-Shooter, and yet they still drop the ball.

My favorite is this 1 sentence mini review from Gamesadar

Not that anyone here bought this game, but here’s your warning:

Anthem Players Say The Game Is Shutting Down And Even Sometimes Bricking Their...

It’s been a rough launch for BioWare’s new loot shooter, and some PlayStation 4 players are now finding that the game occasionally shuts off their system as well.

I’m probably going to buy this when it goes on sale and all the bugs and stuff are ironed out, but at this point, I’m in no rush whatsoever. I love Bioware games, so the draw is just too much to NEVER play this game.

I used to feel the same way until all of the old guard at BioWare starting leaving during/after Mass Effect 3. There’s no one left but Casey Hudson, and I don’t know how much he really contributed without insight from all those veterans.

Also the story in Anthem is pretty boring/uninteresting from all the accounts I’ve heard and read, and the storytelling was generally the biggest draw for BioWare games.

Press ‘F’ for Respects I guess.

To be fair, I still liked ME: Andromeda and I’ve heard again and again that the characters and the character interaction in Anthem is great… as long as you do it by yourself and not in a party.

Not to continue to dog on this game, but it has been tested and confirmed that the level one weapons kill enemies faster than the max level masterwork weapons. 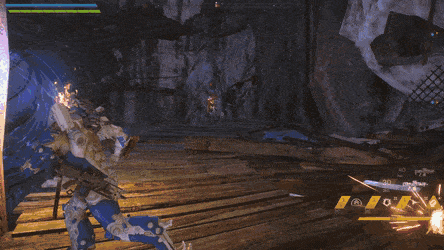 r/AnthemTheGame - [PSA] The Level 1 Defender Rifle is the best weapon in the...

It wasn’t even supposed to be called Anthem. Just days before the annual E3 convention in June of 2017, when the storied studio BioWare would reveal its newest game, the plan had been to go with a different title: Beyond. They’d even printed out...

the tl;dr version — no leadership and the Frostbite engine is why we can’t have nice things.

I wasn’t seeing the next Dragon Age doing well at all after what came of ME:A and Anthem and especially so after now reading why.

Friends, In the spirit of transparency and closure we wanted to share that we’ve made the difficult decision to stop our new development work on Anthem (aka Anthem NEXT). We will, however, continue…